Is it possible to increase the input width of effects? 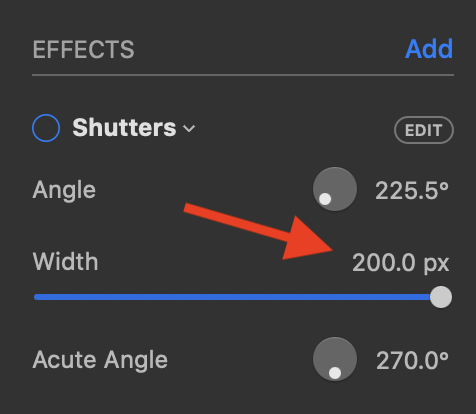 I would like to allow the above parameter to allow arbitrary widths above 200px. As far as I can tell, the Shutters effect is the only one that allows easy "stepped" tiling (where in the selected content is repeated at a different height per row and column) and the size of the content you can repeat is directly limited by this parameter.

Hi Horsemans.
On Pixelmator Pro, to get a value out of normal range, you can generaly hold down the option key and the slider will allow a greater range of values. Unfortunately this doesn't seem to work for the Shutter effect so I think that 200px is a hard limit at the moment (tested on 1.5.2 and 1.5.3 beta).
The folks at Pixelmator are pretty good at responding in these forums so hopefully you'll get a reply from someone on staff saying whether this is a possible change they will make down the line (edit: or if I've missed a trick and it is possible with the current versions).
If this gets buried in weekend traffic and you don't get a response here by early next week, I'd recommend dropping a line to support@pixelmator.com and asking if this value can be increased in future versions.
All the best.
- Stef.
0

Thanks Stef! I appreciate your taking a look.
0

Yep, that's a hard limit for now but I'll add this to the feature request list and we'll see if there's anything we can do!
0